The OPAR committee voted to place caution tape around the playground equipment in hopes of discouraging children and stopping the spread of germs.
(Photo By Sandra Brand)

Ephlin stated all city parks were closed due to COVID-19 Pandemic. Ephlin said this was done to keep the citizens safe. “With everything going on, I got with the mayor and it was decided to close the parks and the community center,” said Ephlin.

“This virus is for real. We are taking steps to protect everybody. We want everyone to be safe,” Ephlin stated. “Kids want to go to the parks, but we just can’t allow it. We need to maintain social distancing.” 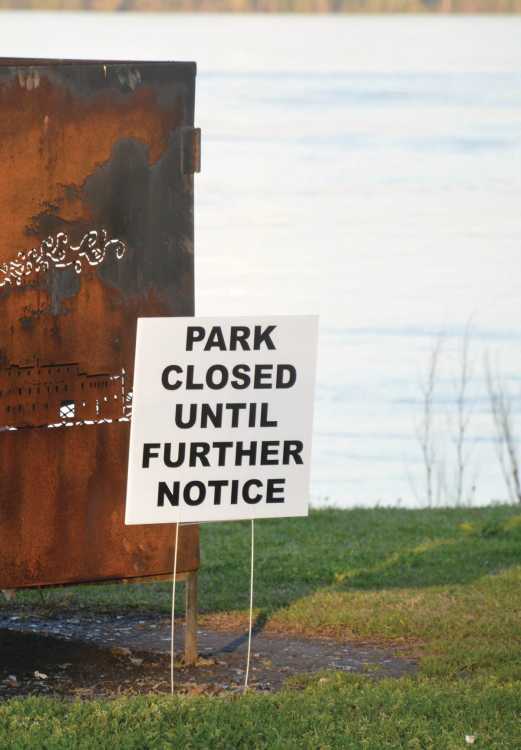 Mayor Sally Wilson also closed the San Souci Park in the hope of keeping more than 10 people from gathering. The boat ramps are still open and fishing on the river is allowed.
(Photo By Sandra Brand)

The golf course, however, remains open, as do the walking trails along Semmes, Country Club Road and the OPAR ballfields. The boat ramp at San Souci Park also remains open although the rest of the park is closed.

Ephlin also spoke about issues such as the delayed start of the baseball-softball season. “We won’t start until we are cleared to do so,” said Ephlin. “But we have uniforms we have paid for which cannot be returned to the supplier. However, if we can get cleared to play, we will. Until then, we are in a holding pattern.”

Ephlin also discussed the Scout Hut and what to do with the building. Ephlin said to redo the areas caused by a storm, would cost $10,000-15,000. “The roof will have to be re-pitched, but just how much all of this will cost is unknown. The best alternative might be to start all over,” said Ephlin.

Brand asked how many events are held at the Scout Hut and does it need to be rebuilt. Ephlin replied, “The building is rented for class reunions in the fall and summer. Other events are held there. The dance class was meeting there.”